Seed is not a commodity, but the basis for food security and national sovereignty

To build a farmers’ movement on seed issues a Beej Swaraj Conference was organised at Punjabi Bawan Ludhiana on 30th May 2011.

The conference began with the inaugural addr 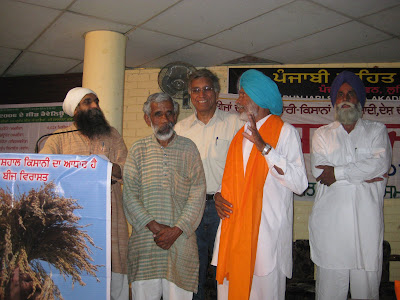 ess by imminent seed keeper and farmer Shri Vijay Jardhari from Uttarakhand who shared his experiences, about how people in his state religiously believe in conserving seed since time immemorial, herb, spices, vegetables, cereals etc are grown for fulfilling the need of the whole village. The state preserves a variety of seeds of various legumes, rice etc which are not traced any longer in any of the states. He stressed that since there are small lands holdings in the state people use it most judiciously by reaping 6 to 7 crops every year which helps in rotation of crop and takes care of the fertility as well.

He further motivated the farmer gathered there to use natural way of farming rather than using, artificial fertilizer, pesticide and hybrid seeds etc, which are ultimately found to be very harmful to not only human but all life present on Earth. He had also exhibited some samples of seeds he had brought along with him. He distinguished between collecting information and possessing practical know how on various matters relating to the environment. He also shared his experience during Chipko movement.

He drew attention to the hardships faced by the farming community in producing food grains during these times of turbulence. The farmers are facing a crisis as far as meeting rising input costs and gaining self sufficiency are concerned. He pointed out the large number of suicides among the farmer community in many states of India due to the debt trap, but fortunately farmers of Uttarakhand are away from this debt trap.

In order to avoid the risks involved in consuming pesticide-sprayed vegetables, he advised growing vegetables the organic way. Pesticide-laced food causes many deadly diseases. Persistent organic pollutants have entered the food chain and are playing havoc with health. The groundwater has lost purity because of the presence of toxins and pesticides. Organic farming is the need of the hour.

Umendra Dutt with moderating the conference also speaks about the significance of ongoing movement on seeds, ecological agriculture, farmers’ income and GM free food in India under Alliance for Sustainable & Holistic Agriculture and Coalition for GM free India. He told the participants about the concept of Beej Swaraj and urged farmers and Kisan Unions to join this all India initiative.

Delivering key note address Sukhdev Singh Bhopal leader of Human Nature Centric People’s Movement said” Man’s relationship with nature has been disrupted because of our mechanized lives. He exhorted the farmers to strike a harmonious chord with nature and other species. All life on Earth are our “natural companions” needing our care and attention. On the other hand, he appraised the gathering of the dangers posed from genetically modified food. He also enlisted the advantages of traditional eating habits and cuisine.

Ajay Tripathi of KVM gave the details of Beej Swaraj Charter that was submitted to PAU later on after conference.

Elaborating dangers of GM Crops Dr Amar Singh Azad, stressed upon the fact that food is the bases of all life and it is sad to note that Punjab is becoming a Hub of several fatal diseases right from Cancer, Reproductive abnormalities, Allergies the list is endless, he said all these were due to the way food in grown in our country. To illustrate his point he quoted Kissinger’s Doctrine “If you control Petrol, You control the country .If you control Food You control Humanity “he talked at length about the foreign policy of the American Government right from the times when Nixon was the President of the country till Date, he also mentioned about the book written by John Perkins “Ikbaliya Byan”. 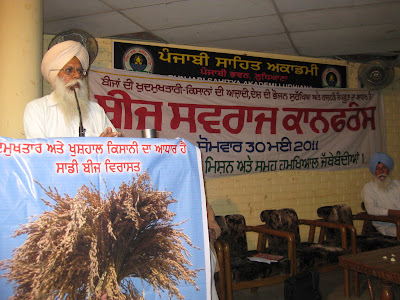 Ugrahan declared full support to Beej Swaraj Campaign and other agendas of KVM and ASHA. He urged upon the farmers to build a strong peoples’ movement . “As we pass through a massive agrarian crisis where foreign MNCs are trying to force their own brand of seeds, GM seeds onto our farmers, our land. Farmers are aware that the govt. and the state govts. are playing into the hands of Monsanto and Mahyico, Bayer and many other giants. The seed industry which is billion dollar business is preventing OUR farmers to save original seeds and are pushing GM seeds with zero tolerance, zero nutrition. That the farmers lament new seeds have no zinc, no iron and the entire generation of people post Green Revolution is unknowingly suffering from many a disease including cancer.
Time that our people, all of us woke up and empowered our farmers who will launch their ANDOLAN from tomorrow onwards to oppose all this and to root for the sovereignty of the original seed.

Eminent thinker and social activist Dr Jagmohan Singh talked to the farmers about how in the new seeds 57 essential nutrients were missing there for e many of our elders are often heard saying that the food is no more tasting as it used to be in the earlier times. He expressed his anxiousness about the fact that the LAND, SOIL, AIR and WATER of Punjab are polluted to the core and seems that the damage is done beyond repair. Bio metal is damaged due to overuse of fertilizer and pesticide. He stressed that there should be a health card of soil as well.

He made the gathering aware tha 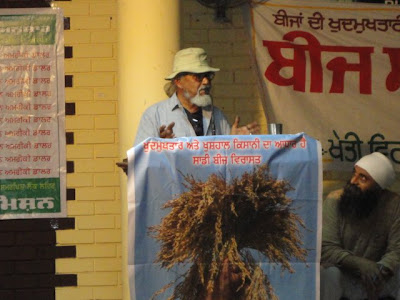 t, Rice was never a crop meant for Punjab, it is actually a crop of Costal areas. The faulty policies of the government lured the farmers to grow rice in Punjab and as a result, we are on the verge of becoming a Barren state.

The next panellist to address was Dr Earnest Albert apart from Kissinger’s Doctrine he also talked about Chernobyl disaster, he mentioned that when he tried to visit the site of disaster no one can still go there and the effect on the life around is that the even the trees growing are poisonous. Man has still not found ways to combat the ill effects of Nuclear mishaps, nor has man found the way of discarding Nuclear waste.

Many Farmer Groups leader also shared their views about the effects of the pesticides on their lives this include Ram Singh of BKU ( Dakunda Group) , Darshan Singh of Jamhoori Kisan Sabha. Representative from Kisan Sanghrash Committee , Kirti Kisan Sabha , Lok Morcha Punjab, Bharat Jan-vigyan Jatha, All India Kisan Sabha , Society for Sustainable Development, Media Artist and other groups were also present in the conference.

Apart from Kisan Union leaders several farmers practising natural farming also addressed Beej Swaraj Conference. This inmcluds Sardar Mohinder Singh of Pipal Mangauli, Rajpura, Patiala shared that from the last 6 years his family is using natural methods to grow crops on his fields and the result is that the whole family has never suffered from any ailments, the animals are also hail and healthy, he shared some of his seeds preserved with the family for more than half a century. Other farmers those addressed conference includes Jarnail Singh Mazi, Hartej Singh Mehta, Jagtar Singh Amritsar, Inderjit Singh Saholi and Charanjit Singh Punni.

All farmers’ Unions participated in conference supported the call given to save the seeds and given the assurance to include Beej Swaraj Agenda in their programs. All unions extended their support for any future action plan on seeds and fight against GM crops.

Union activist Malwinder Singh Malli concluding address elaborated the need of civic movement to take up the challenge of imperialism. On this occasion a oath was taken by Farmers to save their seed heritage, which was administered by Sukhdev Singh Bhopal.

The conference concluded with the honouring of farmers who have been using Natural methods for farming. The entire panellist appreciated the efforts of KVM for spearheading this moment for farmers’ self reliance, ecological agriculture and a paradigm shift.

I recognise, as a farmer, that my own prosperity as well as the very freedom of this country depends on seed sovereignty upheld by millions of farmers like me in India. If I give up seeds and seeds-related knowledge after being lured by short-term benefits claimed by seeds corporations, the sustainability of my farming and food & seed security of this country will be jeopardised. 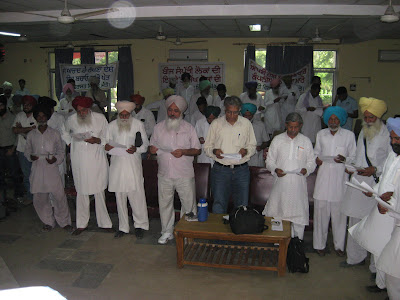 I resolve, therefore, to conserve as many seeds as possible, which are locally suitable for my farm, family and community, so that we may depend on ourselves for something as critical as Seed in our agriculture. This would ensure that diverse, suitable seeds in adequate quantities will be available in a timely manner for me and my fellow farmers and that we will not be at the mercy of profit-hungry corporations. From the upcoming season onwards, I resolve that I will maintain at least ten seed varieties at my level to improve seed sovereignty and my own economic well-being.

I will support all future struggles on seed sovereignty, food security and land rights.

Posted by Kheti Virasat Mission - The ecological movement for Punjab at 11:31 PM