Making a meal of Bt cotton by Bhaskar Goswami 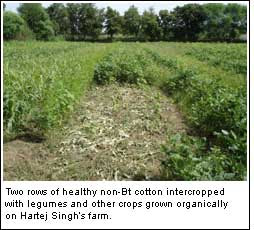 Making a meal of Bt cotton

In the Malwa belt of rural Punjab, mile after mile of Bt cotton fields are under attack by the mealy bug pest. Bathinda, Muktsar, Faridkot and Ferozepur, Punjab’s four major cotton-growing districts, have been badly affected. The so-called ‘magic bullet’, Bt cotton has turned into a bitter pill for farmers who were promised profits but who are now faced with huge losses


Anyone overhearing Hartej Singh on his cell phone would find the conversation strange. “Dho ditta ji Bt nu safed chichra ne,” (“mealy bugs have devastated the Bt cotton”) he bellows at the caller. Standing in his field in the mid-July sun, Hartej is busy fielding numerous calls of a similar nature. He is an exception -- the sole cotton farmer in Mehtawali village in Bathinda whose crop has not been affected by the dreaded mealy bug.

These days, travelling across the Malwa belt of rural Punjab is a revelation. Mile after mile of unending Bt cotton fields, which appear healthy from a distance, are facing unprecedented attack by the mealy bug. Bathinda, Muktsar, Faridkot and Ferozepur, Punjab’s four major cotton-growing districts, have all been badly affected.

While Bt cotton made an official entry into Punjab in 2005, enterprising farmers here began cultivating bootlegged varieties from Gujarat a year earlier. According to official statistics, around 60% of farmers in the state are growing Bt cotton this year. In the four cotton-producing districts, Bt cotton coverage is almost 100%.

Unlike in Andhra Pradesh, Bt cotton in Punjab lived up to its promise of protecting against the dreaded American bollworm, and the number of sprays needed dropped from a high 30 to less than five. This is the main reason why farmers switched to these varieties.

However, Bt cotton protects the crop only against one pest; cotton is attacked by no less than 165 pests. This raises the chances of a resurgence of secondary pests and farmers end up spraying the same quantity of pesticide (if not more) on their crop as they did earlier. In Andhra Pradesh, the number of attacks by aphids, thrips, jassids, etc, has risen since the introduction of Bt cotton in 2002. Tobacco leaf streak virus, tobacco caterpillars, etc, have emerged as new diseases and pests of Bt cotton in the state. This year, reports of fungal root rot in Bt cotton are beginning to pour in from Warangal district in Andhra Pradesh. The emergence of the mealy bug as a Bt cotton pest in Punjab also appears to be a case of secondary pest resurgence, and no amount or type of pesticide has been able to control it.

Scientists at Punjab Agriculture University (PAU) are yet to figure out an effective way of tackling the pest, or, for that matter, what is causing it to assume such epidemic proportions. On July 9, Dr N S Butter, head of the department of entomology told the press that the attack was mainly due to a reduction in pesticide sprays on Bt cotton, and also the proliferation of weeds like Congress grass (Parthenium hysterophorus), which is a major host of the pest.

This is bizarre, considering the fact that Congress grass has been growing in the state for decades. What’s more, the reduced number of sprays was against American bollworm, not the mealy bug, and the type of pesticide used against the two is quite different. Also, American bollworm attacks during the monsoon while the mealy bug is mostly active during summer.

The mealy bug feeds on around 300 crops on the subcontinent. Attacks are generally intense during summer; they subside when the temperature drops. Bt cotton crop in Punjab was attacked by the mealy bug last year as well, but the damage was not substantial as the crop was close to maturity. This year, however, the attack was intense during the second month of sowing.

Unlike the Doaba and Majha regions of Punjab, the four cotton-growing districts in the Malwa belt have poorer soil and fewer irrigation canals. Cotton is the major cash crop, while wheat is the staple crop that meets the food requirements of relatively less well-off farmers in this belt. Bathinda district alone accounts for a quarter of the cotton produced in Punjab. Destruction of the cotton crop in this district therefore affects thousands of farmers.

According to the state agriculture department, over 2,000 acres of cotton crop were destroyed by the mealy bug by July 10. This appears to be a conservative estimate. During my trip to the region in mid-July, every village reported having uprooted at least five acres of Bt cotton crop every day. In the village of Raike-Kalan, in Bathinda, over 100 acres of mealy bug-infested Bt cotton had already been uprooted when I visited the area. It’s the same story across hundreds of neighbouring villages.

That pesticides are not working against this pest is evident from the farmers’ accounts. Balwant Singh, a farmer in Mehtawali village in Bathinda, consulted scientists at both the PAU and the state agriculture department. He was advised to rotate sprays of the carbamate and organophosphate pesticide groups. Balwant understands how this is done, for he is the insecticide retailer in the village. Four rounds of sprays later, he has given up.

The same story is being repeated in Badal village in Muktsar district, the birthplace of Punjab Chief Minister Prakash Singh Badal. During my visit, pesticides were being feverishly sprayed on Bt cotton fields in the village, but to no avail. The bug subsides and re-emerges within a week of spraying.

“We used to cuff our children if they touched even one sapling of cotton. Now we use our own hands to uproot what we planted,” says Nachhatar Singh of Raike-Kalan. Nachhatar owns two acres of land and has leased-in five more to grow Bt cotton. Each leased acre of land costs him Rs 16,000, while the cost of cultivating Bt cotton on the land is around Rs 5,000. All this is now lost. Since his land is irrigated and he could also source some paddy seedlings, Nachhatar uprooted the damaged Bt cotton crop and replaced it with paddy, thereby incurring an additional expenditure of Rs 5,000 per acre. As a result his total expenditure has now shot up to Rs 26,000 per acre -- for paddy! This is a far cry from the Rs 4,000 per acre profits promised by Mahyco-Monsanto while marketing Bt cotton seed!

Sharecropping is practised quite routinely all over the Malwa belt. Since the introduction of Bt cotton in Punjab, the practice of leasing-in land to cultivate cotton has increased among marginal and small farmers. Due to the mealy bug attack, these sharecroppers are now uprooting Bt cotton and replacing it with paddy. This is being done to somehow reduce the huge losses arising out of Bt cotton cultivation.
But unless farmers sell their paddy at a minimum of Rs 1,600 per quintal, they will not recover even their cultivation costs this year. The minimum support price was a mere Rs 650 per quintal last year.

The writing on the wall is therefore quite clear for small farmers. Like neighbouring Sangrur, the four cotton-growing districts of Punjab may soon begin reporting increasing numbers of farmer suicides.

While the state agriculture department and PAU are groping in the dark for a solution, the response from the Centre is a not-so-surprising dead silence. According to the International Seed Federation, this year the estimated size of India’s seed market is around $ 1.3 billion (approximately Rs 5,200 crore) -- the sixth highest in the world. By opening up the seed sector to biotech seed manufacturers, the Centre had signalled, a long time ago, that profits to these corporations weigh higher than the concerns of farmers.

When asked by local journalists about the steps being taken to stem the mealy bug epidemic in Punjab, the Ministry of Agriculture (MoA) passed the buck back saying that agriculture was a state subject.

This is ironical. After all, it wasn’t the Punjab government that approved 135 varieties of Bt cotton in the last five years but the Genetic Engineering Approval Committee (GEAC) of the Union government, of which the MoA is a member. The fact remains that the GEAC has permitted cultivation of Bt cotton varieties without carrying out adequate testing for the resurgence of secondary pests and diseases. As has now become the established norm with respect to genetically modified crops, farmers are being made to pay a steep price for the incompetence of the regulatory body and the greed of biotech companies.

Not only has the introduction of Bt cotton brought disaster in the form of the mealy bug, it is also affecting yields of the subsequent crop -- wheat. Farmers reported an up to 30% drop in wheat productivity on land that had previously been cultivated with Bt cotton. This is similar to reports from Andhra Pradesh where the Kisan Call Centre in Hyderabad received a number of complaints from farmers about declining yields of subsequent crops.

According to Vyavsaya Panchangam -- a farmers’ almanac -- published by the Acharya N G Ranga Agriculture University, Hyderabad, Bt cotton uses more fertiliser than its non-Bt counterparts. If adequate amounts of fertiliser are not applied, the subsequent crop receives fewer nutrients. Further, the Bt toxin also expresses itself in the root zone of the plant and can affect soil biodiversity and ecosystem function, as reported in a research study by the Australian government. These may partly explain why yields of subsequent crops are declining, although nobody is paying much attention to this aspect.

This brings the story back to Hartej Singh, an organic farmer associated with the Kheti Virasat Mission. Singh grows cotton intercropped with rows of pigeon pea, sorghum, maize, soybean, cluster bean, etc. Some of these are leguminous crops that are uprooted and used as green manure. He grows F-1378, an early-maturing American cotton variety and LD 327, a high-yielding desi variety that is also tolerant to Fusarium wilt. His yields are slightly lower than those of the Bt cotton in neighbouring fields.

But while the neighbouring fields are heavily infested by the mealy bug, Singh’s cotton crop is completely unaffected. Likewise for the 100-odd farmers of the Malwa belt who, as part of the Kheti Virasat Mission, are growing non-Bt cotton following the principles of organic farming. Intercropping with several different crops stops pests from migrating to the next row of cotton, and since these crops have never been sprayed with pesticide, predators like beetle larvae can be seen feeding on the mealy bugs. Whenever the pest concentration goes up, a combination of neemleaves and pods, along with Datura, etc, mixed with cow urine, is sprayed on the crop. The attack subsides and damage to the cotton crop is negligible.

Umendra Dutt, Executive Director of the Kheti Virasat Mission, sums it up thus: “Farmers were promised a magic bullet in the form of Bt cotton which has turned into a bitter pill.” Meanwhile, the PAU and state agriculture department are now consulting Dutt to work out a way to tackle the mealy bug. Speaking to the media on August 9, the head of the department of entomology recommended using traditional methods to destroy the mealy bug -- remove the weed hosts and use neem-based insecticides…

(Bhaskar Goswami is with the New Delhi-based Forum for Biotechnology and Food Security)
Posted by Kheti Virasat Mission - The ecological movement for Punjab at 8:08 PM No comments: