Women vows to revive millets in farms and food chain 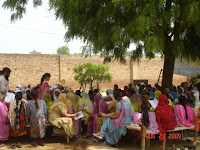 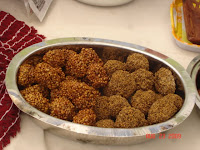 Women vows to revive millets in farms and food chain


Natural farming is a production system that sustains the health of soils, ecosystems and people. It relies on ecological processes, biodiversity’s cycles adapted to local conditions, rather than the use of inputs with adverse effects. Natural farming combines tradition, innovation and science to ensure that we live in partner ship with environment and not to exploit any thing beyond permissible levels so that sustainable development is ensured.

To save and regenerate environment a silent revolution is happening in Punjab ‘Kheti Virasat Mission (KVM). The Women Action for Ecology an associate action group of KVM works in villages to convince farmers about farming without pesticides. In continuation to this process a small gathering at village Jeeda in Bhathinda District on 24th Aug was organized The meeting was hosted by the sarpanch of the village S. Satgur Singh. The farm house of the sarpanch was a perfect venue for such a meeting with a tube well flowing outside his house .The courtyard had a huge canopy of Neem trees under which the meeting was held. More then 150 women and 50 plus children were part of this food festival. Their enthusiasm is a matter of hope to revive ecological agriculture in Punjab. The participation of women is certainly an indicator that sapling sown by KVM’s Women Action for Ecology is taking its roots now.
Mr. Umendra Dutt greeted the meeting of the women of the village .He started by informing them that, DDT and several other deadly pesticides many more poisonous substances are found in the blood samples of the people of Punjab, why is it so? And

To explain this he went back to explain the law of evolution that worms and insects were present on the surface of the earth about 220 million years ago where as man is a very new member of this planet. The man came into existence roughly 10 million year ago, he further said that till a few decades back no artificial fertilizers or pesticides or insecticides were used but earth produced enough food to support life on it, since the time man has started using pesticide sprays etc, he has started giving poisonous food to his family.

He asked the ladies, whether they can serve poison laden food to their family to which all answered in negative, so he gave the example of certain pests and said that they also lay eggs away from the place where they sense danger and what are we human doing? He explained the process how Moth lays eggs and how worms are formed. He said earlier only one spray of pesticide was enough for a crop but not people have to spray 5 – 6 times and still pests are not killed this is because they have developed resistance from it.

He motivated the women to at least start with small portion of land where they should grow vegetables and cereals for home consumption and it should be grown without fertilizers and pesticides, another volunteer of KVM explained how to prepare Jeevan amrit (a cow urine based microbial preparation) to revive microbial activity in soil.

Gurpreet Singh explained that first of all plough the piece of land, add organic fertilizer that is cow dung etc to it and mix it well and level it then water it and leave it for a few days it can be covered by leaves etc. After a few days sow the seed and prepare Jeev Amrit which is made by putting together Jaggry, Besan, cowdung, cow urine, mix it all in 25 litres water and leave it for 2 – 4 days, after it is ready spray it in the field along with water and stop this practice once the plant bears fruit or flowers.

Another remedy was that 7-8 days old buttermilk can be sprayed on the crops to protect plants from ants and worms. He also told how we can make spray out of Neem leaves and fruit by grinding and mixing it with cow’s urine and leaving it for a few days and then spraying it in the crop.

Gurpreet Singh explained that planting the same crop at the same time year after year allows a build up of weeds. Switching crops and planting times keeps any single weed from getting established and helps to control insects also. The farmers were enlighten with the fact that world’s farmers pay $ 12.8 billion per year of pesticides. That is the direct cost – the indirect costs are contaminated ground water, disrupted ecosystems, costly regulatory systems and increasingly resistant pest.
Then Umendra Dutt also made them realize that the animals are also being poisoned since their fodder water is laced with pesticide and gradually all the poison comes into human system. Adulterated milk leads to hormonal imbalance which is affecting females more adversely as it is leading to more infertility rate in many areas of Punjab. Especially where more pesticides are being used there has been alarming increase in the number of people suffering from cancer. He urged the women that they alone can bring the change and generate poison free healthy food for their family .
He lauded the effort made by the village women who revived all the forgotten recipes.
He also gave an example of many districts of AP where they have successfully started, natural farming in 25 lakh hectors.
He told women about revival of millets by women in Andhra Pradesh with support from DDS and other organizations who are working on millets.
Finally he told the gathering that age old indigenous recipes of various foods were prepared and were ready to be consumed so he lead all of them to the pandal where bajre and moth khichdi, bajre de Bhoot pine, Bajre di rabri, jowar di roti, sewiyan, barley de sattu, mal pudday, kheer etc. Some of these things were cooked after the gap of 30 to 40 years. Women and girls who of below 25 years never tasted several millet based foods. Bajra Rabbri is most sought after and now very few old women know its recipes and methodology.

Amarjeet Kaur from Bhotna village discussed the strategies to build women movement for millet propagation and adoption of natural farming in kitchen gardens.
The gathering enjoyed this food feast a lot and dispersed with a pledge to implement this valuable technique in their field and will definitely to activate farming without synthetic pesticides and other agricultural chemicals. More then 120 women make commitment to grow pesticide free food in their kitchen gardens and revive millets in their foods.
A core committee of five women was made who would make arrangements for the Women workshop on natural farming techniques which was scheduled at the same venue on 26th of September.
Report compiled by Ms Shubhdeep Kaur of Delhi Public School, Ludhiana.


Millet based variety of food prepared in Food festival
Posted by Kheti Virasat Mission - The ecological movement for Punjab at 8:19 PM No comments: