Women in colours and celebration revitalizing food heritage, health and nutrition with festivities 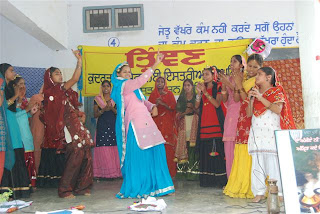 Women in colours and celebration revitalizing food heritage, health and nutrition with festivities

August 30, a lazy Sunday, saw many a women in Chaina village in Faridkot wake up early for a change. They cooked food which they hadn’t cared to cook for a lot of years now. 65-year-old Agyavati Devi made Thandai which she had last made before her marriage. “In my parents’ house, we hardly had tea. It was always thandai, either hot or cold, depending on the season,” said Agyawati.

“But after I came here, we never made it,” she said. Today, she was all excited making it for about 200 women in her village as part of ‘Trinjan’- a gathering of village women when they sit and weave cloth on a Charkha or embroider fabrics. But to her surprise, more than 500 people turned up to sample her’s and her friends’ cooking. With Halwa, Bajra and moth Khichri and roti, Tandre ka saag with Cholai, Palak, methi, Bathu, maize porridge, jaggery squash and ‘Bhoot Pinna’ it was a literal treat for the village children especially.

Trinjan in Chaina village was in continuation of Kheti Virasat Mission’s effort to revive millets and traditional food and to reconnect women back to farming. Amarjeet Kaur of Bhotna village in Barnala has been one of the key persons in starting Trinjan. “Women should grow pesticide free vegetables and millets in their kitchen gardens and slowly take it to the entire field,” she told the women gathered in the Chaina primary school. Amarjeet Kaur has risen from being a Class 8th pass-out to the resource person who trains village women in natural farming. The event reconnected the serious issues of food security and safety, seed conservation, health and nutrition and self-reliance to the festivities of everyday life.

“Women look for peace and happiness for the family unlike men who embroil themselves in matters of money. Therefore they can take up this responsibility to keep the food pure and not laden with the poison of pesticides in a better way. They should even talk to their husbands and get them to convert to poison free farming,” said Umendra Dutt of Kheti Virasat Mission. Pritpal Singh Brar a local natural farmer also talked to women about natural farming in Kitchen Gardens.

“This was our culture earlier. After the whole day’s work, women would collect in one place and weave together. They would bring food from their homes and share it while also sharing their happiness and sorrows. But with passing time, people-to people bonds became weak and now the situation is that people are jealous of each other in villages. Trinjan is a step to bring the old culture back,” said Dr. Inderjeet Kaur, president of All-India Pingalwara Society, Amritsar. All the speakers stressed that millets should be given to children for its nutrient rich quality.

The women, while preparing the delicacies, remembered how these dishes used to be a norm in Punjab at one time. “Gur sharbat was a routine drink for farmers. Work could not be stopped during blistering heat, so Gur Sharbat acted as an energizer and a coolant. But nowadays, kids like coke, what to do,” said septuagenarian Nasib Kaur. The fact that Nasib Kaur has been an efficient weaver in her time was proven when she won the on the spot fastest weaving competition. “I prepared the dowry of all my four daughters with my own hands. Never bought a piece of cloth from the market,” she said. The self-reliance of her era was evident in her voice.

“Gur sharbat was something totally new to us though we had heard about other things,” said Harmanjyot Kaur, an under-graduate student from Chaina village. If the elders were praised for cooking, Harmanjyot took the cake when it came to cultural dance and background preparations. Along with her friends, she did a wonderful decoration and event management.

The enthusiasm reached its peak when 85-year-old Bhagwan Kaur and Lajwanti Devi offered to sing the Trinjan songs which had never been heard off by the present generation. Followed by Gidda by Harmadeep and her troupe, the entire programme turned out to be what Dr.Inderjeet Kaur described as “actual entertainment sought by our villagers.” “Actual entertainment involved all of us, the song and dance by the people, and not watching it on television,” she said. Along with her, village Sarpanch Pritam Kaur, Rajwinder Kaur, Kulvinder Kaur and Sukhwinder Kaur played a major role in the success of the programme. The young girls also held a meeting in the end to decide the future course of action.

Gurdeep Kaur, with her Malpuras brought back the spirit of month of Sawan which is the season for Trinjan. And as if to compliment all their efforts, a downpour greeted them by the end of the programme.
Posted by Kheti Virasat Mission - The ecological movement for Punjab at 7:38 AM 1 comment: