A farmer in Rori Kapura village ploughing his Bt cotton field infested by mealy bug
The government departments pressed the panic button, they had worked on Sundays even, discussing which pesticide is better and how to made pesticides available to farmers. They declared war against mealy bug but ammunition is being provided by a private company, Syngenta. And it is the poor farmers who are bearing the cost of this expensive ammunition. The agriculture development officers had become brand campaigner for Actara, another pesticide manufacturing company. The entire agriculture establishment of Punjab seeks asylum in poisons only. While promoting pesticides they had also advised farmers to spry Weedicides all along the farm to prevent weeds. This means more poison load on all ready devastated eco-system of Punjab. The chemicalisation and monoculturing of agriculture in Punjab has made its agriculture experts bounded royal labours of chemical farming paradigm. They can not think and see beyond that and even they do not want to think and see. They had fixed notions, theirs no desire to break the present agriculture thought process and paradigm. They can not dare to do so, as it does not suit to masters of present agriculture system. Today the monoculture is at gene level ‘bt’ gene fighting lepidopteron pests across crops.

Unfortunately the agriculture scientists in Punjab cannot think any solution other than poison. That is why, now they had brought amusing justifications for mealy bug infestation. According to Head of Entomology department of PAU Dr N S Bhutter, "Prior to the introduction of Bt cotton, we used to spray the crops with chemicals which killed these pests. Now as the pest umbrella has been lifted because Bt cotton does not need so many sprays, these pests are becoming dormant". He is responding to Indian Express correspondent. He goes further when asked by journalist why PAU didn't think of this attack when it was rooting for Bt cotton as a panacea for Punjab farmers' problems, the reply given by him reflects that there is some thing seriously wrong with the vision of Punjab agriculture establishment. Dr Bhutter says "At that time there was no mealy bug, and we were dealing with just American Bollworm. With chemicals, we will be able to control this bug too" This is approach of not only PAU but also of department. The agriculture experts encouraged farmers to spray pesticides, resulting misshapings and accidental exposure of pesticides. Large number of farmers and labours who got exposed to deadly pesticides hospitalized at several towns in Cotton belt. Two deaths were also reported due to pesticide exposure. Mobile vans carrying big banners of pesticide companies are criss-crossing villages to educate farmers about mealy bug attack. But educating farmers is a money minting exercise for pesticide companies.
This means there neither is any holistic approach, no farsightedness, no concern about destruction done by chemicals, nor was any thought for ecological, economic and social implications of this highly toxic agriculture. It is very disgusting that agriculture establishment does not want to come out of vicious cycle of pesticides and agrochemicals. Now they take refugee in blaming adverse weather for mealy bug menace. The agriculture establishment has become selective dump, deaf and blind and do not want to see what is happening elsewhere. When lakhs of farmers are successfully growing cotton without using any sort of chemicals and even without Bt seeds, why this cannot be happen in Punjab. But our politicians, bureaucrats, scientists and planners all are hypnotized by companies. Even companies are powerful enough to demolish every type of political difference. All main parties of Punjab become mad in the craze for Bt is so much so that every one want to claim on credit for Bt cotton release and its further expansion. 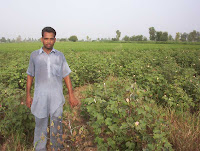 A Farmer in Chaina villages showing his Bt cotton crop destroyed by mealy bugs
It is also quite interesting that both main political parties had a fight over credit of bringing Bt cotton into state. Not only this, after assuming power the new Akali Dal regime has declared that they shall sell more packets of Bt cotton then previous Congress government. The euphoria for Bt cotton not ends here, despite mealy bug attack on Bt cotton the agriculture minister Sucha Singh Langah proudly announced in his Independence day address at Muktsar on 15 August at Muktsar that his government is proud of distributing 15, 35, 500 packets of Bt cotton seeds at the rate of Rs 760 per packet. But question is who is paying the royalty for these packets. Certainly neither Mr. CM or Agriculture minister nor VC, PAU or Director Agriculture is going to pay . The Farmers of Punjab had already paid some 100 crores rupees to Monsanto as royalty in last three years and this process may continue till farmers dare to come out of Bt seeds deceive.
But in this darkness of chemical farming, there is a ray of hope also. The natural farming is making inroads in Punjab. Mealy bug does not worry natural farmers at all. The farmers who are practicing natural farming neither use Bt cotton nor do any pesticide. But still their cotton crops are healthy and free from any destruction caused by mealy bug. First of all they witnessed very mild mealy bug attack, courtesy multiple cropping system. Their cotton field has as many as 8 crops to 15 crops. Secondly if mealy bug even attacked their crops they controlled it with neem, dhatura and cow urine. There are large numbers of farmers who are proud owner of naturally treated farms. These farmers are erecting the foundation for paradigm shift in Punjab. A constructive change is taking place but minus experts and the establishment. It is a community initiative and farmer driven movement called Kheti Virasat Mission. The growing numbers of farmers practicing natural farming is an indicator that society wants a change in agriculture perspective and paradigm. These farmers are already walked out of Bt and pesticide trap and now leading the Punjab for a imperishable prosperity, free from exploitation of farmer as well as Mother Nature.
The mealy bug gives a lesson to agriculture establishment and protagonists of chemicalised agriculture that their pest control design is faulty. The small insect dares the agriculture scientists to change their view, but who has guts to do so? Punjab devastated by ecological crisis, debts, suicides and cancers waiting for this.

Posted by Kheti Virasat Mission - The ecological movement for Punjab at 6:08 AM No comments: